Please be advised that Vatech is not responsible for any consequences resulted from the forcible upgrade of the Windows version of the PC linked to the product not included in the below table.

Microsoft announces that they will continue in supporting Windows 10 until October 14, 2025, and Vatech also does not force you to upgrade your Windows version (10 to 11).

As Windows 11 has been offical released, the compatibility verification of the following Vatech products under Windows 11 environment has been completed. 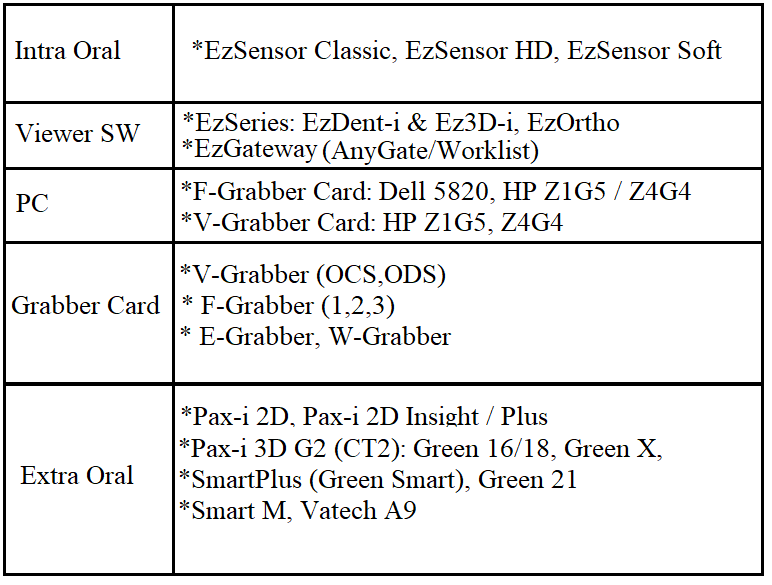 The following devices are considered Unsupported on Windows 11 and should remain on the Operating system from factory.

Legacy & Class B devices - All Listed Units are considered "Legacy" and are non -supported for Windows 11.

NOTICE: Vatech is not able to guarantee any upgrade to any windows platform other than 'as delivered by manufacture' due to changes or updates to Windows* by Microsoft with out notice at any given time due to changes out side of manufacture control.

All units currently running on Windows 10 that are not able to upgrade to Windows 11 should follow the prevention guide to prevent updating to Windows 11. Those systems will still be supported by Microsoft as follows;

-Any upgrade or Update windows platform should be carefully managed by Certified IT Consultant in accordance with Manufacture specifications and suggestions. Failure to comply or deviation might cause potential stability issues or undesired failures.

-Always retain Original Capture PC and Hard Drive in its entirety in case of upgrade failure to reversion of the system and retention and/or image backup.

-In some cases limited functionality might occur, such as twain, direct integration and other such which was originally designed to operate in the previous platform. In those cases we are unable to provide functionality.

Once the upgrade or update is completed, It is strongly advised that any upgrade a certified IT professional creates a 'clone' copy of the working hard drive in case of failure due to such updates or changes out side of our control.

-The original PC provided is the recommend PC and PC Specs to run the device.

-All other PC's including those specs used by previous IT are all subject to user - use at own risk even if meeting or exceeding 'speciations' even if provided by Vatech Remote support.

We recommend using the provided PC; originally provided 'As delivered by manufacture' as designed to operate to support the internal cards, drivers device functionality including software - reconstruction and so forth.

-If OS upgrade is selected; we recommend Certified IT benchmark and replace any faulty components as needed, if the PC fails beyond a repairable limit it might be required to source a supplement PC from 3rd party source.

-Replacing hard disk in existing PC, Solid State drives offer a great way to increase the performance of the PC..

-Upgrading from Windows 10 directly to Windows 11 is the most effecient method once all software driver and hardware is confirmed compatible, however it is advised to create a cloan drive or system backup as a fall back in case the upgrade fails.